Home • Posts • Stroke survivor frustrated by attitudes and accessibility
Next 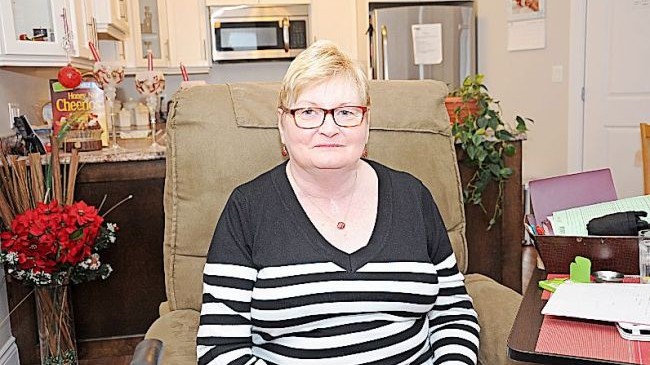 That’s just the reality she has come to face in the past seven years since a stroke left her partially paralyzed and legally blind.

Colbourne came from her room, clearly freshened up and happy with her attire, with quad cane in hand. Her mind cleary sharp, she apologized for the wait and, it being years between visits, she ask question after question, rather than providing answer after answer.

An active businesswoman and community volunteer was always her way. She cares about people, and dedicated a lot of her time to helping others, much of that through the Canadian Cancer Society. Even since her stroke, she continued to give. She was instrumental in starting a local brain injury-stroke survivors support group.

Following her stroke, she says she believed she would make a full recovery. Now, she realizes she is as mobile as she will ever be.

Through her battles with disability, she sees the world through a different lens — and that has little to do with her partial blindness. Colbourne is dismayed at the lack of accessibility throughout Corner Brook. That is only topped by what she says is the ignorance of many people she encounters as she struggles to get around.

“There are a lot of good people too, don’t get me wrong,” she said. “But, wow, some people are so mean and inconsiderate.”

She was in one store, she says, and a woman told her she shouldn’t be there because the wheelchair she was in took up so much room.

“I just sat there and cried,” she said. “People have no respect for the handicapped.”

At least that store had a wheelchair. Colbourne has found many stores without one, something she feels should be mandatory. When there is not one, she is not mobile enough to make her way through aisles to shop — one of the few things she says she can still enjoy doing, under the right circumstances — and she has to return home frustrated and dejected.

Other times, the chairs are so far damaged they are practically unusable.

There are also not enough ramps to provide access to the buildings throughout the city, she added.

Transportation for the disabled in the city is practically non-existent, she said. She can’t use the bus and she cannot afford to continually use taxis. Colbourne is also shocked at the number of people without disabilities who take up the blue zone parking spaces.

During the winter months, she is even more confined to her home. She said sidewalks, if they are adequately in place, are often not cleared.

Colbourne went to exercise her right to vote one time, she recalls. When she got there, the disabled entrance was locked and she couldn’t get inside. Then she got stuck in the elevator. Finally getting to the polling station, she learned she was at the wrong location. They would not take her vote, so she went home discouraged, not able to make the additional effort after what she just endured.

There are also few places to turn for help. The Spinal Cord Injury office, formerly the Canadian Paraplegic Association, shut down in 2013.

“We didn’t ask for this. It is something that happened to us. We should be treated fairly.”